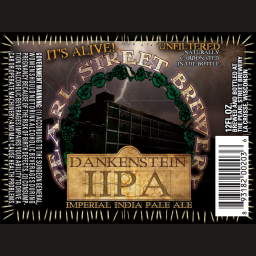 Continuing my tour of Wisconsin, I’m visiting LaCrosse – former home of G. Heileman and one of the U.S.’s largest Oktoberfest celebrations…and current home of City Brewing, a large contract company. It also is reported to have one of the largest bar & tavern populations per capita in the U.S., so I’m a big fan of the town.

Pearl Street Brewing is actually a craft brewer that moved into an expanded facility and started bottling beer several years ago after surviving nearly a decade pouring draft only.

I was kind of intrigued by their “Imperial” India Pale Ale, particularly as it poured a deep caramel pearl red color, hinting at the complex malt grain bill.

There was almost no head, save a few large bubbles that hung around a bit throughout the glass. The nose was herbal pine, as expected, but the profile is primarily malt based. There’s a big hop bite too, with a long dry finish, but not nearly what I’d expect from an IIPA. Personally, I appreciate the balance, even if unexpected.

Checking in at nearly 10% ABV, the maltiness and balance combine to make this a relatively drinkable beer and one would not suspect it to be as strong as it is, as the profile is that of a crunchy IPA.

It’s a solid effort, with only the flat appearance and slight medicinal notes holding it back in my view.