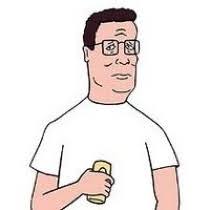 “Is there anything beer can’t do?”
– Hank Hill

He’s the main character and usual protagonist of the animated series King of the Hill. Hank, along with his family (wife Peggy, son Bobby, and niece Luanne), has a central role in most story lines. Hank’s voice is provided by series co-creator Mike Judge. The Economist briefly mentioned him as one of the wisest people on television.