In an ode to the Beastie’s finest video ever, check out this “chase” scene from our friends at Carlton abroad:

It reminds me of this: http://youtu.be/z5rRZdiu1UE

Samuel Smith’s is one of the legendary English import breweries. Fiercly independent, this Yorkshire based brewery avoids many of the trappings of modern “commercial” commerce in their operations and maintain a strict adherence to their traditional brewing methods, including the exclusive use of water from their original 18th Century wellspring and their open “box” fermenters. They have long been available in the U.S.

It was one of the first “great” beers I’d fallen for back in the late 80’s and early 90’s as some of these “strange beers” would make their appearance at the beverage store where I worked through college. I hadn’t had a sample of the Nut Brown Ale or the Taddy Porter in at least a decade…and it’s always interesting to me how a new tasting holds up to my memory. Sometimes, what was “HUGE” back them seems pretty tame nowadays.

This one holds up exceptionally well. The aroma from the bottle hints of molasses and it pours rich and creamy, with a golden off-white head that maintains a presence throughout the pint. The body is medium full, with a mild sweetness of brown sugar, nuttiness and malty caramel rounding off to a lingering and balanced dryness. This is really outstanding and it almost takes me by surprise to find that my memory of this being “really good” still holds true even in comparison to local efforts over the past decade.

A hearty LOL from our friends at Restaurant Bastards…they’re absolutely right, aside from the fact I’d start the “unedible” translation at med-well.

“You’d like that well done?”- You’d like to add an extra 30 minutes to the time that it’s going to take to cook your food? I hope you enjoy eating leather.

The final line in this article is the money-shot:

Every dollar spent on “pseudo-craft” beer, such as Leinenkugel, Blue Moon, Killians, Shock Top and the like inhibits the ability of the local guys and true craft brewers to access shelf space, gain access to tap handles and cooler space in bars and restaurants, and gain exposure to consumers. The little guys don’t have sales staff to “bribe” retailers with tickets to the game, tons of table tents and “point of sale” trinkets – or worse – illegal cash or “in-kind” payments in exchange for access. The little guys only have consumer demand to drive access. That’s you.

Ask for and support real craft beer, not the big guys trying to capitalize on the hard work the craft brewers have already done.

If you care about “local,” and want your consumer dollars to support your community, neighbors, friends…heck, support American companies…then you should be aware of what each purchase means, even to a motivated retailer who needs to keep each space on the shelf and each tap handle profitable. Ask for and support real craft beer, not the big guys trying to capitalize on the hard work the craft brewers have already done.

The following is the work of Wilhelm W. Seeger, former professor of German at Grand Valley State University. This is the third part of his essay published in the Grand River Valley Review, Volume VIII, Number 1, 1988, by the Grand Rapids Historical Society. Posted with permission.

Continuation of Part 1 and Part 2…

With the number of German settlers steadily increasing in Grand Rapids in the fifteen years after the Civil War, the local demand for beer continued to rise, and it comes as no surprise that new breweries, most of them German-owned and -operated, were established in the city.

The Frey brothers – Charles, Christian and Frederick – established the Coldbrook Brewery on Coldbrook Street in 1874. The following year John Adrion and Andrew Greil set up the Valley City Brewery on Page between Tile and Plainfield; a short time later the city directory listed the owners of the establishment as John Adrion and Peter Kautenberger.

On January 1, 1876, Jacob Veit and Paul Rathman founded the Eagle Brewery on the city’s west side at the corner of First and Stocking.

A year later, Adolph Goetz, former brewmaster at the Kusterer brewery, and Kossuth W. Tusch built the Cincinnati Brewery at 208 Grandville Avenue and began advertising their lager beer as “equal to Cincinnati beer!” which, according to claims made by the Cincinnati Chamber of Commerce, enjoyed a national reputation for high quality. ( 8 )

In January of 1879 Goetz sold his interest in the Cincinnati Brewery to Kossuth’s brother Frederick and left for Colorado where he hoped to set up his own brewing business. His stay out west was brief, however, and he returned to Grand Rapids to become Kusterer’s brewmaster once again.

All of the German brewers concentrated their efforts on the production of lager beer, a light, dry, carbonated beverage with a distinct taste of hops that is aged in storage from six weeks to six months before use. Lager beer was the favorite brew of German, Austrian and Dutch consumers. English and Irish beer drinkers, on the other hand, preferred ale and porter, malt beverages that are darker, heavier and usually more bitter than lager beer.

In 1875 and 1876 a number of non-German brewers launched operations in Grand Rapids. Aldrich J. Smith and William Draper set up shop on the corner of Oak and South Division, and David L. Stiven established a brewery on the northeast corner of Canal and Coldbrook. Both businesses were short lived, and it is perhaps these failed ventures that Albert Baxter had in mind when he wrote, “An effort was made some twelve years ago to establish the making on a large scale of ale and porter, but the measure of success was not flattering. “( 9 )

By 1879, output in the city was confined largely to lager beer. Seven breweries – all German-American enterprises – were operating at the time: the Valley City Brewery owned by brothers Mathias and John Adrion; George Brandt’s Union Brewery; the Cincinnati Brewery operated by the Tusch brothers; Christoph Kusterer’s City Brewery, the oldest in Grand Rapids; the Frey brothers’ Coldbrook Brewery; Peter Weirich’s Michigan Brewery; and Veit and Rathman’s Eagle Brewery. Another brewery joined the ranks in 1887 when Adolph Goetz established the National Brewing Company at the corner of West Leonard and Broadway.

…continued in Part 4 next week.

“For some ten-thousand years, women have maintained power in male dominated hunter-gather societies through their skills as brewsters.”
— Alan Eames, one of the great early beer historians who paved the way for many who followed. 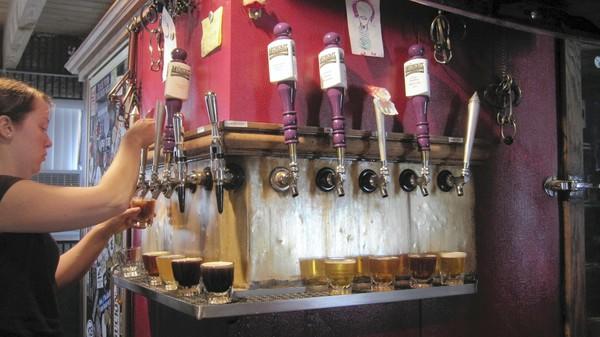 This was a neat perspective as the Trib managed to find Grand Rapids on a map and actually sent someone to check the place out – he even bends an elbow or two on company time!

Read all about it HERE.

We’d have to agree with a few of the comments, but it’s still a nice shot in the arm for the local “beer tourism” trade. Cheers! “You can only drink 30 or 40 glasses of beer a day, no matter how rich you are.”
— Colonel Adolphus Busch, co-founder of Anheuser-Busch. Born in the German state of Hesse, he married the daughter of Eberhard Anheuser and purchased shares of his father-in-law’s “Bavarian Brewery” with his inheritance after his own father’s passing.
He acquired rights to the trademarked name “Budweiser” in 1891…a disputed moniker to this day, as we’ve discussed in these pages.

As we’ve detailed in numerous posts on this site, the large commodoty brewers in the U.S. are hurting, in terms of falling sales and fierce competition from local brands – at least in this country. Their response has been International consolidation and growth outside of the U.S.

There are numerous reasons for this, of course, but the biggest is the growth of the Asian market, specifically China, which is already the world’s largest beer market and continues to grow as their middle class – and expendable income – grows.

Many of the German brewers I know have long sought growth in Asian markets (and elsewhere) as even small brewers have formed partnerships, exported to or built facilities in the East – even as the German beer market shrinks. Many graduating brewmasters are also heading to Asia in search of work (where it is sometimes more common to pay a “professional” wage than it is in the U.S.).

The same motivation is pushing the U.S. “big” brewers to external expansion as well, who are using their new International clout to muscle their way to the forefront of growth in these emerging markets. AB InBev, for example, now has 35 production facilities in China alone, and accounts for a growing market share. To be sure, this trend is not limited to beer companies as other industries are also “saving” their brands by seeking a stake in Asian markets.

Bottom line is, a big picture pattern may be emerging here. As the commodity brewers seek the low hanging fruit of emerging markets, they may slowly be abandoning their mature markets…but I don’t think it will be too terribly long before those same craft competitors and wider consumer choices are nipping at their heels in these new markets as well.

I reviewed a bit of Big Buck’s background in my review of their Big Buck Beer some time ago.

Their beers are by and large “training wheel” brews – nothing too extreme, in an effort to attract “mainstream” beer drinkers and their food was an ode to the carnivore who liked his protein cooked thoroughly.

I stopped by their flagship location on a recent trip to Mackinac Island and was pleased to discover that original brewer and manager Scott Graham was back at the helm. A large figure in the Michigan beer scene, Graham has also served numerous roles as a brewer, distributor, and leader. Since 2007, he’s also served as Executive Director of the Michigan Brewers’ Guild.

They only had a half dozen brews on tap – down from their usual dozen or so – but each was much improved from recent experiences. Their beers do change often, however.

Doc’s ESB is their interpretation of the classic British beer style. It poured a light brown/deep red in color, with a touch more body than some of their other brews. It was balanced, possessing a mildly sweet body and nice little hoppy, crispy bite. The finish is herbal and dry, as it should be.

This was their best effort on this particular visit.