Call it “David versus Goliath” if you will, with David holding his own, thank you. Well…at least of the time being.

As many people may know, Anheuser-Busch, now owned by ABInBev, has engaged in a long, protracted fight with Czech national brewery Budejovicky Budvar NP over the name “Budweiser.” The conglomerate already controls nearly half the U.S. beer market, a percentage that may be increasing soon. Americans know their version of Budweiser, while the Czech version is actually sold under the name Czechvar in the U.S. (and actually distributed under recently-ended a trade agreement with the U.S. brewer). In most of Europe, the Czech brand uses their original name, while the Belgian-American label is known as “Bud” or “AB.”

Naming rights in Great Britian remained in dispute until a British court recently punted, basically saying they can both use the name.

A bit of history on this is warranted. The term “Budweiser” was actually what the Germans used to refer to beer brewed in the style of Budvar, in Bohemia (modern Czech Republic). It was equivalent to the term “Pilsner” to refer to the style brewed in Plzen nearby and known most famously through their brewery, Pilsner Urquell (basically translating at the “Plzen well or spring.” Historically, in fact, many breweries in America and beyond made Budweiser-style brews, including arch-rival Miller (among other American brewers):

The term basically referred to a pale lager beer with Saaz hops, not dissimilar from pilsner beer. While the term “pilsner” became a style, however, Anheuser-Busch turned “Budweiser” into a brand name. (There is a similar scenario in the craft brew world with Anchor’s branding of the term “steam beer.”).

While the current national brewery in Czech, Budějovický Budvar,  is actually 19 younger than Anheuser-Busch as a company, the style itself and brewing tradition is MUCH older, dating back to the 18th Century and beyond. In fact, Czech imported “Budweiser” from a previous brewery predated the St. Louis incarnation by a couple years in the U.S. The Budvar and A-B companies signed an agreement a far back as 1938 that the U.S. company could use the name in the Western Hemisphere and the Czech brand in Europe. 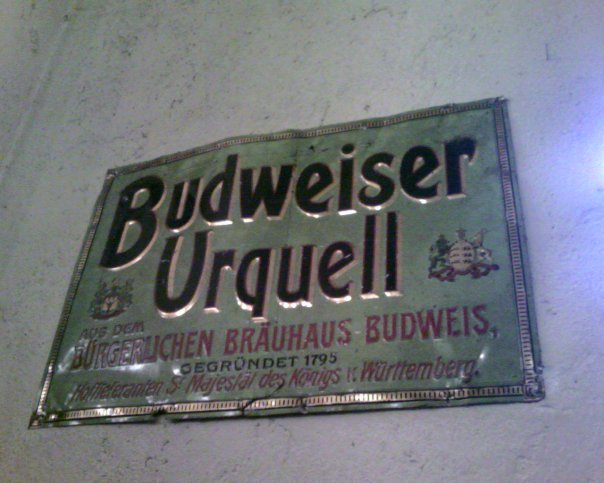 Unfortunately, this Czech region has also suffered some indignity over the past couple hundered years as a crossroads of European conflicts which has limited the Budvar brewery’s ability to “compete” internatinally with any consistencey. Wars including the Prussian consolidation of German-speaking lands in 1871 under Bismarck and the Kaiser following the Franco-Prussian War, World War I and the collapse of the European monarchies, World War II and the Cold War, when Czechoslovakia (merging of Czech and Slovakia) fell behind the Iron Curtain. The result of which meant, that by the time the Warsaw Pact nations abandoned their Soviet shackles, the American Budweiser was thoroughly established as a brand in the West, while the Czech brewery was “known” for the most part only in Eastern and Central Europe and to beer afficianados.

The issue became more pressing as the Soviet Bloc opened up, the European Union removed trade restrictions and the two brands became competing in the same markets. They began squabbling about the name again, with legal fights dating back to the 1970’s.

There is an anecdotal story, that Anheuser Busch tried to strong arm (subscription required for link) the Czech Republic into selling their nationalized brewery to them in the 1990’s under the threat of no longer buying Czech Saaz hops, as they were the largest consumer of their largest cash crop. In fact, A-B has moved much of their hop production to North America. The Czechs basically gave them the middle finger salute and have thus far refused, calling their brand a matter of national pride. Earlier this year, however, AB did buy a smaller Bohemian brewer that had also used the “Budweiser” brand name regionally and there are rumors that they will acquire at least a stake in the Budvar brewery if the brewery is eventually privatized by the Czech government.

From our view, much of this is a bit silly as the courts could very reasonably decide that the term is a STYLE and not a NAME. Numerous brews use the term “Pilsner,” (including the somewhat humorous claim of Miller Lite) and the term “Budweiser” could be no different. I suppose the continued consolidation of major beer companies will ultimately incorporate them all under the InBev roof, however, and decide the matter. If that were to happen, the “real” all malt traditional version is likely to become a footnote under the dominating pressure of the bigger adjunct brand, desperate to halt their own sliding sales, while the Budvar brand is likely to exist in name only or as a regional specialty. Of course, there are other issues in the Busch house as well, so the corporate masters may or may not follow conventional wisdom when and if they manage to acquire Budvar.

UPDATE: (18.Dec.2012) Negotiations between the two companies have broken off, according to the Czech brand. LINK