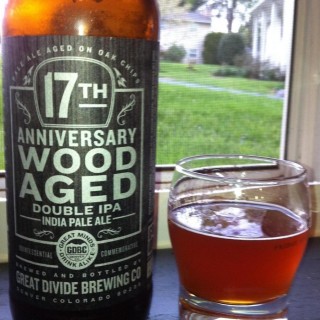 I was perusing the shelves at one of my favorite beverage stores—and I try to patronize the local guys as much as possible, as they’re consistently more responsive to customers than the “manager” in some chain store—and stumbled upon a couple cases of Great Divide, out of Colorado. They’re not often seen ’round here and apparently this has led to a decision to pull distribution out of this state, along with several others in the Midwest. While Yeti Imperial Stout is probably their most famous brand, I snapped at a chance to scoop up a few samples before they’re tough to come by.

Their 17th Anniversary celebratory beer was about 9 months old, according to the bottle date, which didn’t concern me much given this store’s beer handling practices and the fact that it was a double IPA … you know, the kind of beer invented to stand the test of time.

Based on their mainstream “Denver Pale Ale,” this is an amped up version aged on a bed of “French and American Oak chips.” The effort—and the bottle maturation—have probably served it well. Pouring a milky copper color, it’s lifted by a full and durable off-white head. There’s a beautiful floral hop aroma and a big, spicy hoppy bite to go along with a full semi-sweet body. There are prickly notes of wood, vanilla, yeast and a lingering maltiness that combine pleasantly with the ongoing herbal bitterness. It’s surprisingly complex—as I wasn’t sure what I’d be getting in a 9-month old sample—and very nicely balanced.

If you’re in the Midwest, and you have a chance, scoop up a few of these. You can send me an email to thank me later.